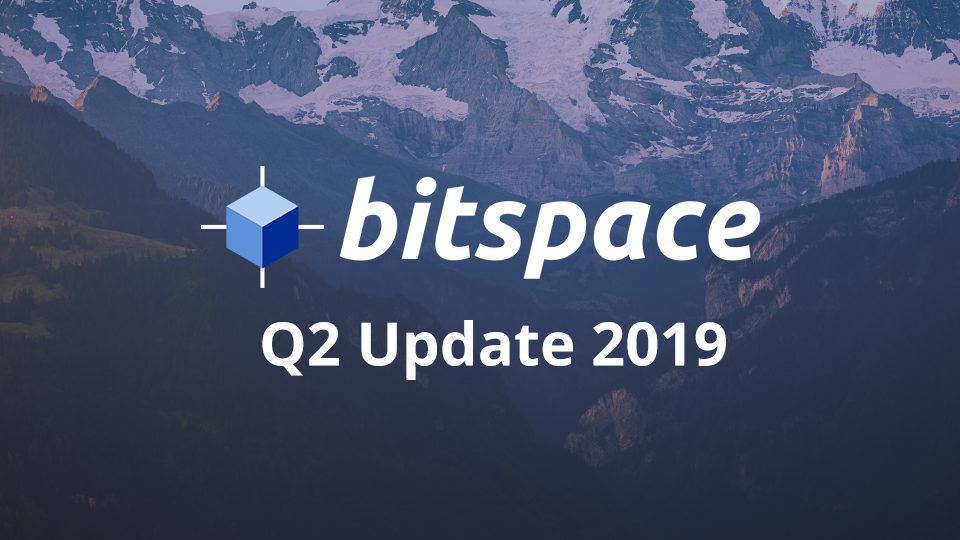 Following a tough year in the markets, there is a growing confidence that the bottom for cryptocurrencies is in and that the recent surge in digital asset prices may be the beginning of a new uptrend. Compared to the previous bull market, the global infrastructure built around the technology has vastly improved, even though we are only at the very early stages towards fulfilling the potential of blockchain. At BitSpace we do our very best to contribute to this development and we are excited to report the most recent updates on our projects in this newsletter.

BitGate is ready and we are about to roll out the first version of the BitGate wallet application. This month we started a signup campaign to onboard our first users. We are giving away free Bitcoin to the people who sign up for a total value of 25,000 NOK. Each user will receive 50 NOK worth of Bitcoin and will additionally will be rewarded with BitPoints for getting friends to join. BitPoints is a reputation-based points system that will allow our users to unlock new features in the Bitgate application. We are excited to get a response from our first users and we are confident BitGate will be the catalyst that accelerates mainstream adoption of digital assets in Norway.

You can sign up for the BitGate campaign here.

Earlier this year, we welcomed HandleKrypto.no to the BitSpace family of companies. HandleKrypto is a web-based Norwegian virtual currency exchange, created by serial entrepreneur Olav Småriset. It offers instant purchase of cryptocurrencies Bitcoin, Bitcoin Cash and Ethereum directly to your wallet with a credit card and also allows fully automatic conversion between hundreds of cryptocurrencies.

“Welcoming HandleKrypto into the BitSpace family allows us to work closely with a brilliant young Norwegian entrepreneur, and enables strong synergies with BitGate. It is an important step in building the digital finance ecosystem in Europe.”

Acquiring partial ownership in the company is an important step towards the goal of building a Norwegian startup incubator for the Blockchain and Digital Finance industry in Europe. HandleKrypto is ready for launch in the Nordics and soon the rest of Europe, which synchronizes well with the launch strategy of BitGate. The BitGate wallet focuses on integrating APIs of exchanges and other services providers. The strong partnership between BitSpace and HandleKrypto ensures aligned incentives and synergies in relation to BitGate integration.

“Tabletop ID is a much-needed solution for a billion dollar industry that is ready to be disrupted. It is a solid use case for blockchain and ties in heavily with other interactive sectors that we are looking at. The tabletop industry is ready for clean data and effective direct marketing.”

In March, BItSpace announced its partnership with the music blockchain Soundac (formerly known as Muse), a blockchain-based system for autonomous royalty payments for musicians. Similar to the way Bitcoin rewards miners, and Steemit rewards content creators and curators, musicians are incentivized to connect their music to SOUNDAC. The music then becomes available on streaming services such as PeerTracks and DSound, where users can sign up and enjoy free listening without any ads or subscription fees.

BitSpace and SOUNDAC share strong roots in the BitShares and DPoS communities. The Norwegian blockchain community was introduced to SOUNDAC when Founder and President Cédric Cobban presented the project at CryptoFinance 2017 in Oslo, Norway. With a strong position in the Nordic blockchain industry, BitSpace aims to give SOUNDAC a platform in the Nordics and help develop their community network.

On the 19th of March, BitSpace organized the blockchain track at Oslo Big Data Day, an event at the BI Norwegian Business School hosted by Xplorico. Some of the country’s foremost blockchain experts as well as industry leaders and public institution representatives were present. We have released multiple videos from the seminar, such as the panel debate about the future of digital assets in Norway. SingularityNET VP Hilen Amin’s presentation on the Power of Collective AI and Torbjørn Bull-Jenssen’s talk on how blockchain should and should not be used. It was a pleasure to organize the track, providing an arena for constructive dialogue between our industry and the key institutions around it in Norway.

The Kraków Bitcoin Meetup, organized by BitSpace Poland (CEO Ola Haukland), has passed its one-year anniversary and sees increasing numbers of attendees, much to the credit of the speakers who have recently taken stage at the events. In February Piotr Dyraga from Akena Software spoke about threshold signatures for crypto wallets, while the meetup in March revolved around the MimbleWimble protocol and a special look at the Beam privacy coin.

Recently, Ariel Gabizon, former cryptographer and engineer of Zcash, spoke about discovering a serious bug in Zcash last year, one of the big crypto news stories in early 2019.

In April, we were happy to welcome Chris Carr, lead scientist of BitSpace – NTNU project Graphchain, who gave an introduction to the cryptography of Bitcoin as well as presenting Graphchain and the benefits of DAG technology.